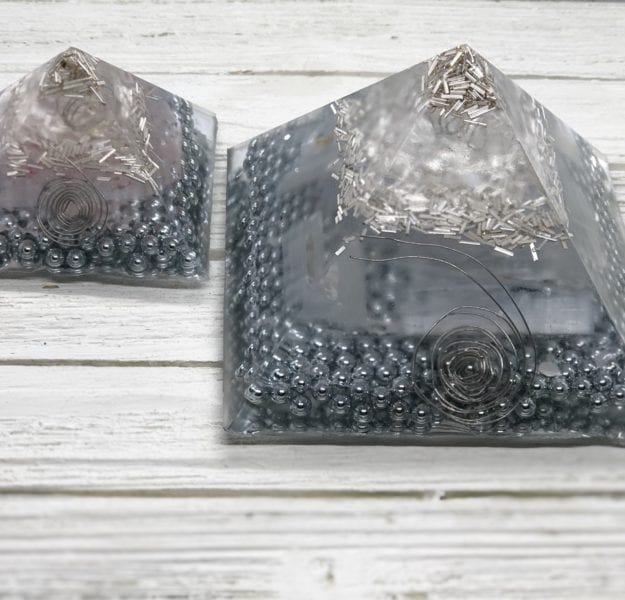 I am often asked about Orgonite, and if I sell it.  I use it throughout our house actually.  I do not make it, but I do carry my friend Don’s product.  I asked him to share some of his info about the topic, as I felt he was the best to share his knowledge on the product and its benefits.    – Kerri

What is Orgonite?
By Don Constable

Orgonite is a mixture of catalyzed resin with metal shavings, particles or powders, poured into molds. It is said to attract aetheric energy similarly to Reich’s accumulators. Some people also add a couple of crystals to the mixture for their ability to make the energy more coherent or to enhance the working the orgonite.

Some people also add a couple of crystals to the mixture for their ability to make the energy more coherent or to enhance the working the orgonite. Thus orgonite is a substance which functions as a self-driven, continuously-operating, highly efficient energy transmutation device, drawing in negative life energy and transmuting it into positive energy. The resin in orgonite shrinks during the curing process, permanently squeezing the quartz crystal inside which creates a well-known piezoelectric effect inside the crystal, meaning its end-points become polarized electrically, this causes it to function more effectively as a positive energy generator. Although crystals improve the function of orgonite, they are not necessary for the orgonite to work.

Anyone can build these devices with easy to find materials. Orgonite is simply a mix (approx. 50/50 ratio) of metal and resin (polyester, urethane or epoxy). It can be poured into all kinds of shapes: pyramids, cones, disks, cylinders, and pendants, to name a few. Some people use it to combat pollution and cell tower radiation. Others use it for clearing or purifying energies in their houses, or to enhance the growth of plants in their garden. It seems to work also really well in various kinds of spiritual healing work. Energy sensitive people have given me multiple comments on how orgonite affected them. They have shown me that it does its job. You can also interact with it and use it for specific purposes.

Why We Need Orgonite?

Orgonite is a substance made of resin, metals, and quartz that balances and harmonizes bio-energy, otherwise known as orgone, chi or prana.

Dr. Wilhelm Reich, an Austrian psychiatrist, researched orgone energy in the earlier half of the 20th century, and today’s orgonite devices are built on his findings.  While conducting his research, Dr. Reich found that organic materials attract and hold orgone energy, while non-organic metals simultaneously attract and repel the energy.

Orgonite is based on these two principles. It is a 50-50 mix of resin (organic, due to the fact that it is based on petrochemicals), and metal shavings (inorganic).  A quartz crystal is also added to the orgonite mix.  This is because of its piezoelectric properties, which means that it gives off a charge when it is put under pressure (resin shrinks when it is cured, so constant pressure is put on the quartz crystal).

Due to the fact that the elements contained in orgonite are constantly attracting and repelling energy, a “scrubbing” action takes place, and along with the charge that the crystal gives off, this cleans stagnant and negative energy and brings it back to a healthy, vibrant state.

What Are The Benefits of Orgonite?

The effects of orgonite differ from person to person. Some feel the energy straight away (usually as a tingling or warm sensation) while for others the effects are cumulative. The most commonly reported effects of orgonite are:Better sleep and vivid dreamsMore energyBalanced moodsDecreased sensitivity to EMFsSpiritual and psychological growth increased resistance to illness (orgonite should never be used as a substitute for professional medical care)
What Are Some Uses for Orgonite?

Most people use orgonite to balance and strengthen their energetic field, and to help provide protection against EMFs. You can also use it to:
• Deepen meditation
• Boost plant growth
• Remove negative energy in a specific place
• Strengthen intentions and visualizations.